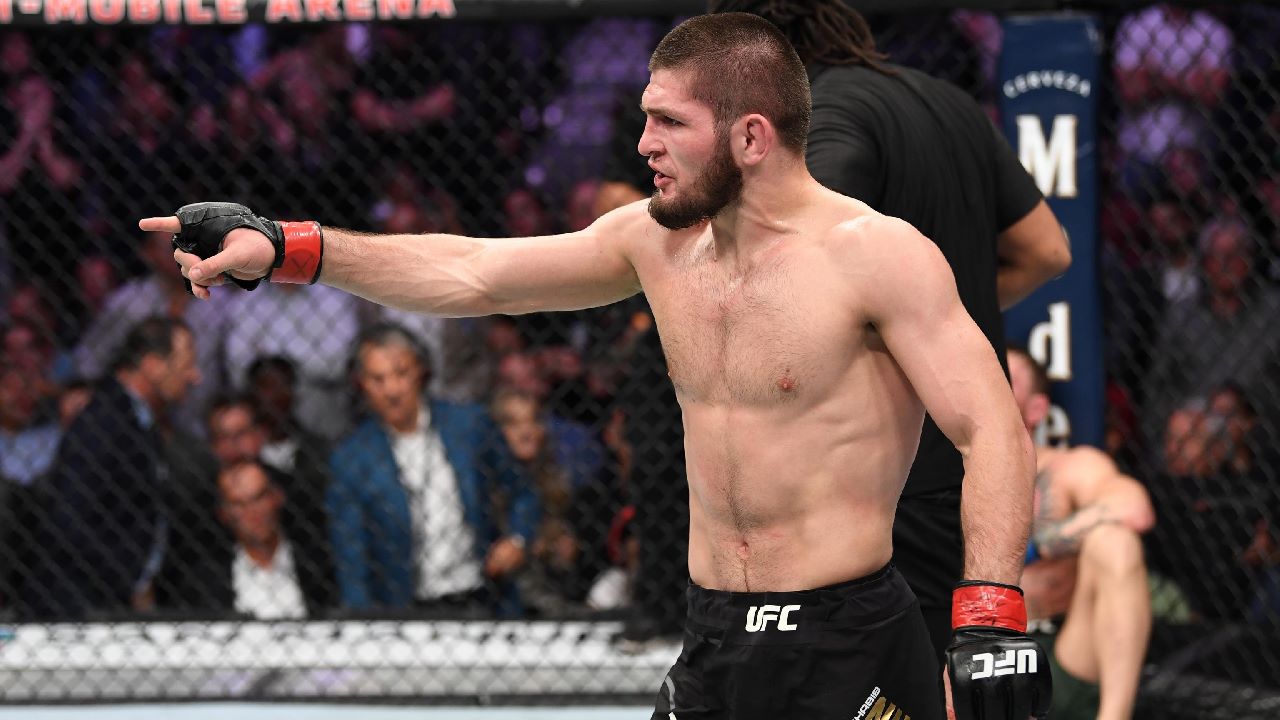 Regardless of what sport is in question, unbeaten records always fascinate fans, pundits, and experts alike.

Combat sports always carry another sense of gravitas when it comes to being ‘unbeaten’ as to go a whole career without suffering a loss, is often regarded as the ultimate mark of any fighter.

Whilst the UFC and MMA is a relatively new sport from a consumer perspective, few fighters have revolutionised the sport in such a short space of time that Khabib Nurmagomedov has.

Hailing from Dagestan, a Siberian province in Southern Russia, Khabib Nurmagomedov is one of very few brawlers to have never been beaten professionally in the UFC – possessing a remarkable 29-0 record.

First bursting on to the UFC scene in 2008, Khabib Nurmagomedov was rumoured to have been fighting bears as a toddler and he took to life in the octagon like a duck to water.

Whilst his professional record stands at 29 victorious fights, Khabib Nurmagomedov is believed to have fought hundreds more opponents in his native Russia and the lightweight/welterweight has been able to step away from fighting with his perfect record in tact – hanging up his gloves at the back end of 2020.

It is hard to believe Khabib Nurmagomedov is still only 33 and inevitably, rumours are often abounded as to whether he can be persuaded back into the octagon but regardless of whether he does or not, his legacy as one of the all-time greatest UFC fighters is impenetrable.

Here is a rundown of some of the most valuable Khabib Nurmagomedov cards on the market:

As mentioned, Khabib’s legacy in the UFC carries some serious weight and by virtue of just owning his original rookie card carries a certain amount of value.

The card itself depicts Khabib striking out, something he didn’t do all too often in his career and there are additional versions that all have differing values.

Whilst the base card is the least rare, they were not mass produced meaning it carries value, with the Russian Flag version of the card only having 188 cards in circulation.

As rookie cards go, this particular Khabib Nurmagomedov card isn’t too rare but the prestige of having one of the earliest Khabib cards in inception is certainly a keepsake.

It took until 2014 for the first Khabib autograph card to hit the market and it is a hugely valuable piece for all levels of UFC card collector.

One of the USP’s for the card is the image, with Khabib picking up his opponent in one of his trademark holds, with submissions and chokes something he has always been synonymous with in the world of UFC.

There are only 149 of the base autograph card on the market, with even fewer print runs for some of the limited edition versions of the card.

In the same set, a Khabib ‘Fistograph’ card was also produced in 2014 by Topps, which is an autographed card with an additional print of the fighter’s fist, with a print run of just 10 – adding hugely to the rarity value.

Compared to some fighters, it took Khabib quite a long time to become an established household name in the UFC and his 2013 Topps Finest UFC card is reflected in that.

2013 was the second consecutive year that Khabib had made it onto the list of UFC fighters in the card collection and once more it shows him striking out, a relatively rare sight in his career.

Refractor versions of this card are highly valued and once more, having an early Khabib card will never lose value.

As happened with his UFC career, Khabib’s standing within the world of the sport progressed steadily over time and by 2017 he was one of the biggest draws within the game.

The 2017 Topps UFC Chrome Khabib Nurmagomedov card is simplistic in design but shows the man from Dagestan in his trademark fighting position, ready to take on allcomers.

Different colour refractor cards in this range all carry different serial numbers, whilst the base card does too and with low print runs all round, it is certainly a Khabib card worth having.

The most recent Khabib offering on the list is the 2021 Prizm UFC Khabib Nurmagomedov Champion Signatures Auto #4 – a card that signifies the end of his professional fighting career.

He is only one of 9 fighters to have been allocated a card in the Champion set and it is certainly a card that will carry value in the future.

Is a Khabib Nurmagomedov rookie card a good investment?

Few fighters are able to hold any sort of claim to Khabib Nurmagomedov’s UFC record and any card that depicts the great man carries value.

Back in 2012, Khabib was a relative unknown and his rookie card from back then is representative of just that.

Furthermore, with the autographed version of the Topps UFC Knockout Khabib Nurmagomedov card not hitting the market until 2014, having a Khabib card from 2012 is a hugely valuable piece of UFC memorabilia.

Whether or not the man from Dagestan makes a return to the octagon remains to be seen but regardless of his future ventures, he remains a UFC legend.

What are the best value Khabib Nurmagomedov cards?

Despite having first fought in the UFC back in 2008, Khabib only has just under 10 years of cards for collectors to get their hands on.

Arguably, the best cheap Khabib card is the 2013 Topps Finest UFC Khabib Nurmagomedov #22 card, as there are plenty of base versions on the market and it is a card that dates back to the start of his career.

Of course, high value refractor versions of the card can yield serious sums of money but for collectors looking for value, the 2013 Topps Finest UFC Khabib Nurmagomedov card is perhaps the best offering on the market.