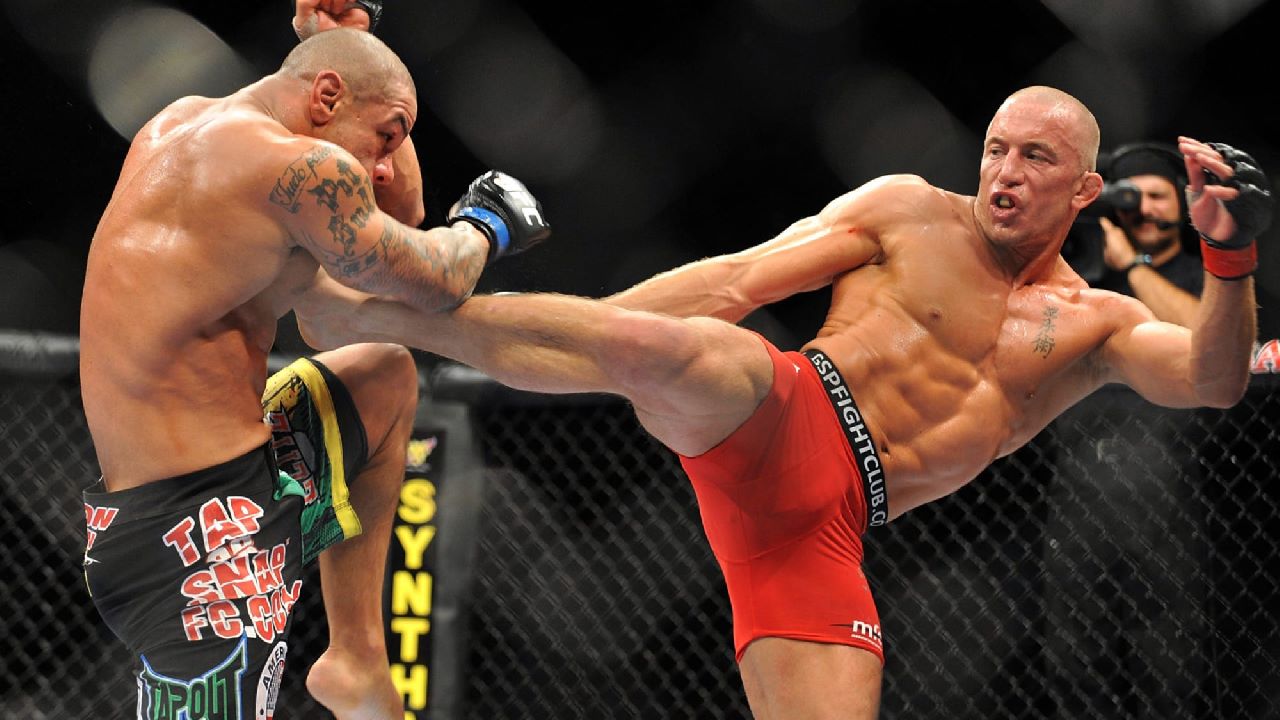 Canadian Georges St-Pierre has a firm reputation as one of the greatest ever fighters in UFC history and his decorated career is still revered today – 5 years after his retirement from the octagon.

‘GSP’ as he is known, broke the mould in the UFC in many ways, parking the trash talk and brash behaviour, to let his fighting do the talking and his career haul of achievements speaks for itself.

Not content with winning the world title at two weights, Georges St-Pierre enjoyed a 15 year career at the very top of the sport – including a 4 year hiatus between 2013 and 2017, that saw him return to win the World Middleweight title on debut at that weight.

Since his retirement, GSP has continued to grow the international profile of UFC and his inception into the UFC hall of game in 2021 was just rewards for his incredible career in the sport.

He has also gone on to become one of the most reputable all-action actor and his status has gone on to transcend the UFC and combat sports.

Here is a rundown of some of the most Georges St-Pierre cards on the market:

The 2008 Donruss Americana II Ring Kings GSP card is the first depiction of the Canadian on a sports memorabilia card and it sees St-Pierre adopting his now infamous clenched fist pose.

Back in 2008, St-Pierre was a far cry from the all-action legend of the UFC he went onto be and as a result, the GSP rookie card is highly sought after.

Whilst the autograph version of this card is quite easy to come by, the non-autograph card also holds plenty of value too and it is a real collector’s item for any UFC card enthusiast.

Most big-name fighters have ‘made it’ when they get a signed Topps card and for Georges St-Pierre that came back in 2009.

With the image on the card showing GSP delivering one of his trademark head kicks, it is a strong piece of memorabilia for all collectors – regardless of budget or collection aspirations.

There are a few versions of the card, with the base autograph version carrying a decent amount of value, whilst the red ink version of the card has a print run of just 25 – making it incredibly rare for GSP card collection enthusiasts.

Whilst they are not easy to come by, any card that shows two fighters battling it out in their prime is always sought after and the 2009 Topps UFC Round 1 Georges St-Pierre vs Karo Parisyan fits that bill.

The iconic scrap between GSP and Parisyan dates back to 2004 and it was the Canadian who came out on top, in an enthralling encounter that went the distance in Las Vegas.

As for the card, it is number 17 in the 2009 Topps UFC Round 1 collection, which has only 46 cards as part of its collection – adding further to the rarity of the piece.

It is also somewhat of a rookie card too, dating back to 2009 within the Topps collection, which is when GSP was first added to the roster of fighters being depicted on UFC cards.

Bloodlines have become synonymous with UFC card collection over the past few years and back in 2009, they released their first ever collection of prints.

As one of the biggest fighters of the time, GSP was inevitably in the roster and his card is one of the most valuable from that particular set.

Adorned in the colours of his beloved Canada, the slick foil design on the card is what we have all come to know and love from the Bloodlines range and this GSP card is one of the original offerings, a huge draw for all UFC card collectors.

The Topps Finest range is one of the most reputable card collections within the UFC card market currently and the GSP card from 2011 is one for the ages.

With the Canadian doing what he does best on the image of the card, looking to wear his opponent down with an arm bar, the slick design of the card makes it aesthetically pleasing.

The regular base version of the 2011 Topps Finest UFC Autographs Georges St-Pierre card is unnumbered but still holds a reasonable amount of value, whilst the autograph parallel versions all hold a huge amount of value – with print runs of 25 or less in most cases.

Is a Georges St-Pierre rookie card a good investment?

The advent of UFC as a global sporting phenomenon and Georges St-Pierre as a UFC fighter went hand in hand through the mid 2000’s and as a result, any rookie card of GSP’s is worth having.

Whilst the 2008 Donruss Americana II Ring Kings Georges St-Pierre card isn’t the most valuable GSP card on the market, it is restricted to a print run of 500 and there are stamped and unstamped versions of it.

In addition, when it comes to UFC legends, few fighters enjoy the legacy and standing within the sport that GSP does – adding further kudos to both his rookie card and any St-Pierre memorabilia moving forward.

What are the best value Georges St-Pierre cards?

As a rule of thumb, the earlier Georges St-Pierre cards on the market are more expensive than his most recent offerings – perhaps reflected in the peak in his fighting popularity in the UFC.

The 2010 Topps UFC Main Event Cage Relics Georges St-Pierre card is an affordable collector’s item for GSP fans, and that range also has a small piece of the cage inserted onto the card – adding to its value further.

Due to his status within the sport, there is always value to be had when purchasing Georges St-Pierre cards and generally speaking, that value looks set to hold for a fair while to come.