PSA vs Beckett – Which Grading Service To Choose? 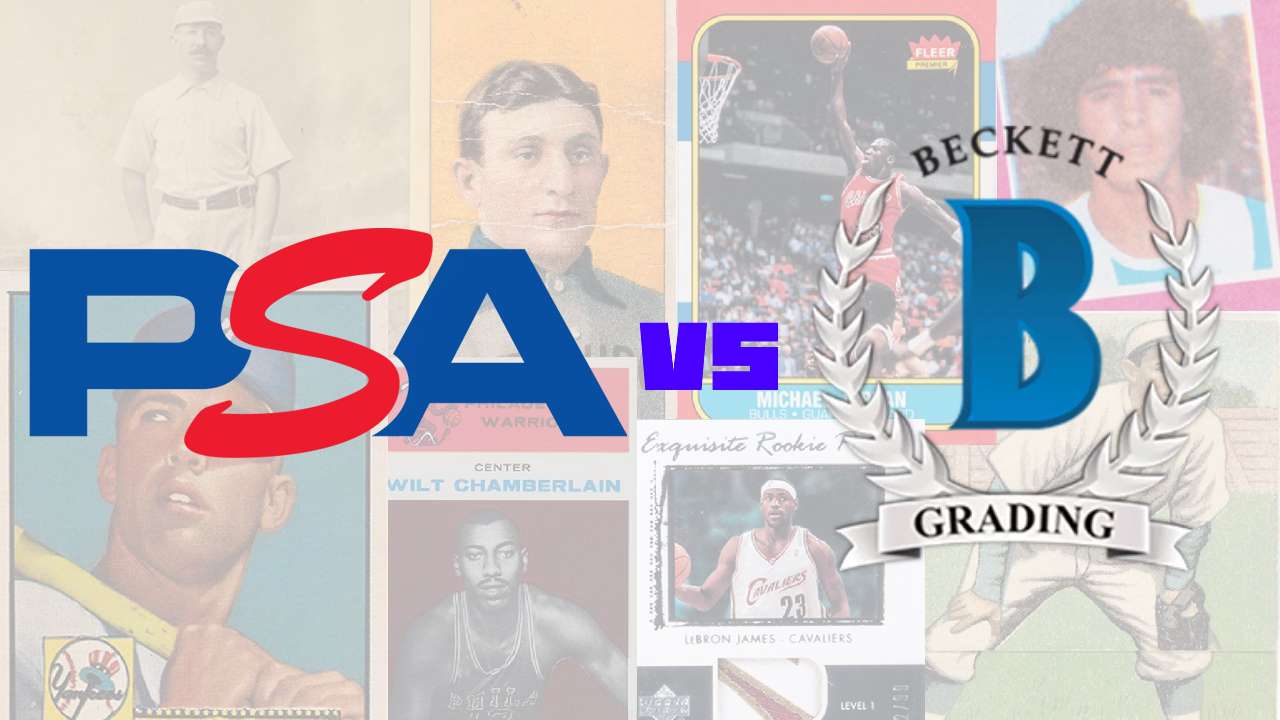 Whilst sports cards are always highly sought after by collectors, one of the age old debates that continues to rumble is which grading service to use.

Having any trading card graded is a basic pre-requisite for collectors as it adds to the authenticity of any piece and in turn, this also develops any potential resale value further down the line.

It goes without saying too that having a quality grading service is hugely important for any collectors looking to ensure any cards they have at their disposal are genuine and the associated grading markets are growing, with more and more sports trading cards than ever before out there for people to get hold of.

Grading however is of course in the main subjective, which can add an element of inconsistency across cards, with some collectors having a preference for a specific grading service.

That said, most grading services have a hard and fast criteria by which they look to grade each card and PSA and Beckett have revolutionised the sports trading card grading market in recent years by being able to develop a system that accommodates for all levels of card collector.

Often personal preference is the difference between using PSA and Beckett or any pricing structures that either company may have in place but such is the quality of both operations that deciphering which service to use can be tricky business.

The original and for many the most reputable grading service around is PSA (the Professional Sports Authenticator) who have been operation in the United States and beyond for over 30 years.

With such a rich history and heritage within the sports trading card game, PSA have an unmatched reputation and claim to have graded over 40 million cards throughout their three decades in operation.

Such is the hold on the market that PSA have had for many years, that they do set the blueprint for most cards that hit the market, with rival companies often following suit in terms of any pricing value they place upon a card.

What makes the PSA so sought after is their grading service across a range of sports card internationally, as well as Pokemon cards and even general sporting memorabilia.

To many, PSA are the oracle when it comes to the valuation of any collectible and as a result, having a card or item graded by them is often pricey business.

For standard card collectors, the grading service will cost anywhere between $10 per card and up to $500 per card, depending on the value of the card and the grading times requested, which inevitably takes a serious chunk out of any potential resale value.

Any card collectors with a really expensive piece on their hands can expect to pay up to $5000 if their card is worth six figures or more and whilst the percentages don’t stand out, PSA are remunerated handsomely for their services.

Part of the reason that PSA are able to charge so much money to collectors to have their cards graded is due to the fact that they in essence, invented the grading system that is universal today.

Ranging from ‘PR 1’, which represents a card in ‘poor’ condition, through to ‘GEM-MT 10’, which references a card in perfect nick, the PSA grading system is recognised the world over in the sports card collection sphere and adds real authenticity and value to any piece.

Of course, having to fork out a serious sum in the first place when selling a card can seem counter intuitive but once a card is graded, it does carry serious sell on value and collectors are always keen to see their card higher up the PSA grading scale.

Factors such as colouring, marks, staining and being off-centre are always focused upon by PSA graders, which inevitably to impact both the grading score and the subsequent value but collectors are always happier to have had a PSA grader take a look at a card, before they choose to part ways with their hard earned cash to buy it.

Any industry in which only one company rules the roost is often seen as a bit of a monopoly and as a result the emergence of Beckett as sports card trading graders in 1999 has impacted positively on the overall market.

Originally setting out as a baseball card grading service, Beckett has developed exponentially over the past 25 years and are now one of the major players in the sports trading card grading system.

Comparisons to PSA are always drawn and inevitably, each company has pros and cons in terms of the service they manage to deliver for their customers.

Pricing and grading waiting times are two areas of consensus where Beckett tend to prevail, with much more affordable options on the table for traders looking to get their cards valued.

In addition, Beckett pride themselves on their smooth turnaround times, which enables collectors to become more reliant on the services they offer and also assists when it comes to reselling.

The Beckett grading system is also seen as a pro for collectors looking to use their services, as they offer a grading to .5 of a number, rather than the whole number service offered by PSA.

Arguing the benefits of each system can be an arduous process but for many collectors, the Beckett system is seen as easier to use and it enables customers to gauge exactly where their card fits on the sports trading card market.

However, the reputation enjoyed by PSA does supersede that of Beckett, meaning an equivalent graded card with both PSA and Beckett will carry more value if it has been graded by PSA.

Taking a deep dive into the relative merits of both PSA and Beckett only serves to prove that they are both excellent sports trading card grading companies, that can add value to any potential resale with their approval.

With PSA providing an elite level service, for those traders who take their collection super seriously and Beckett offering an affordable, but quality option, there is something on the market for everybody with PSA and Beckett.

How To Check Sports Card Values For Free

How To Buy Sports Cards Wholesale